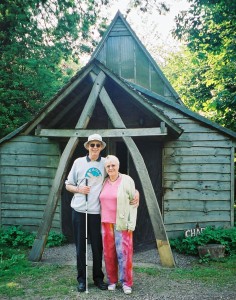 Rob and Catherine at Hetton Hall, the former Motherhouse of the Northumbria Community

Before I met Rob I had the usual misconceptions about blind people, since I have known him I have heard many people asking him (or me) the same questions that I used to ask.  A common one is that blind people can recognise a person by feeling their face – sorry, great for Hollywood, but not true!

So we decided that I should write out the most common “myths” and Rob would answer them, by the way, Rob is now totally blind.

1. Blind people have no sight at all

In the United Kingdom, there are about one million people who are known to suffer degrees of blindness. Blindness is often described as visual impairment. Most are partially sighted, but about 200,000 have such a severe problem that they are registerably blind. Among those who are registered blind, only 18% have total blindness. Even most of these can tell the difference between light and dark.

The other 82% have some degree of remaining sight. Some see only a vague blur; others as if they are looking through frosted glass. Another group have no central vision and there are those who see as if looking down a long narrow tunnel. It is possible for some blind people to have enough sight to read a computer screen but not enough to safely cross a road.

There is no truth in the widely held belief, that blind or partially sighted people are somehow endowed with a better sense of hearing, touch or scent. They have similar senses to everyone else, except that they have serious sight loss.Many endure further difficulties due to hearing loss, poor touch, or inadequate scent or taste. Especially if they are older in years.

Sadly, there is no acquired ‘sixth sense’ which helps visually impaired people overcome their sight loss.

However, many of them have been able to improve their circumstances by learning to become careful listeners or are making the best out of the senses they have retained.

3. Braille is used by most blind people

Out of the million known visually impaired people in the United Kingdom, there are about 13,000 fluent Braille readers. Many others use Braille in a limited way, to label items or to make simple notes. To be able to read Braille, it is necessary to have good touch sensitivity.  Not everyone has the sensitive nerve ends to do this, especially if they are older in years.   Braille is vital for people who are both blind and deaf.

A small number of older people use Moon instead of Braille. Moon is simpler to learn and its tactile curves and lines are easier to feel than Braille dots.

Many blind and partially sighted people use computers, smart phones or tablets. Either at work, educational establishments and in the home. Some use large print or modified colour displays.    Others use audio text readers and a further group has electronic Braille pads. Their specialist software enables them to use standard office programs, browse the Internet and communicate by Facebook, Twitter, email, text messages and phone calls.

5. Guide dogs are used by all blind people

There are around 5,000 guide dog owners in the United Kingdom and there are up to 200,000 people who are registered blind. Whilst these valuable dogs are able to considerably improve the independence of their owners, they are not always the right solution for everyone. Looking after a trained guide dog takes extra time and effort and not everyone has the ability or inclination to do this.

A guide dog works within simple limitations. Generally speaking, it is only useful if its visually impaired owner has a good mental map of each journey. Established routes are worked out in advance with the help of guide dog professionals. A guide dog has been trained to safely lead someone along a length of pavement and to sit down at the next kerb. It will also stop if there is a hole in the pavement or if there is an obstacle on the path. In each case, it will await further instructions from its handler; a dog cannot judge the speed of approaching traffic, though its owner can use it to cross at a pedestrian crossing.

7. A blind person will recognise your voice

Some people have very distinctive voices, but most do not. You will have noticed this when using a telephone.

It is more difficult to recognise people by voice when walking outside or in a busy room. Blind people are no different from everyone else; except that they are unable to see that someone is speaking to them.

When you meet a visually impaired person, introduce yourself by name. If you know their name use it, then they will know that you are speaking to them and not someone else. This is particularly important if there are other people about. To further attract their attention, gently touch their upper arm with your hand. When you are leaving, say you are going away. Nobody likes to find that they have been speaking to an empty space!

8. All with limited vision can use large-print books

Large print is a great help to many people who have limited sight. But some visually impaired people may be able to find their way around a room quite well, but not be able to read large print. They may have lost a major part of their central vision or find difficulty in dealing with the glare of white paper. If this is the case, they may appreciate having important items read to them or recorded onto a CD or MP3.  If they use a computer then send them the information by email.

This is only partly true. The biggest danger is from the unconsidered actions of sighted people. These include obstacles being left on pathways, like bicycles and badly placed shop signs. Also, vehicles which park in front of pedestrian crossing areas and dropped curbs or fail to observe speed limits.

So called “Shared Spaces” are particularly dangerous for blind people, and for visually impaired people generally, many older people also find it impossible to safely use these kerb-less places.

Most visually impaired people use a mixture of common sense and mobility training to improve their independence in the community and at home. Blind and partially sighted people participate in a wide range of sport and recreation, and have a good record of safety.

10. Blind people cannot live on their own

Many visually impaired people live on their own, either by choice or circumstances. Some of them have full time jobs or have children of their own. They may receive some sighted help, but will do most things themselves. There are a range of items to assist them in safely preparing food and doing their household chores or gardens. Most major supermarkets have staff who are able to help blind and partially sighted  people with their shopping. And many shop on the Internet

11. Blind people do not enjoy TV or theatre

Not true. Some blind and partially sighted people can see quite a bit of a television picture. It depends on the usefulness of any of their remaining sight.   Those who cannot see the picture at all, often enjoy the words and sound on quiz programmes, musicals and wildlife features.  Digital TV has an option to switch on audio description  for many programmes and DVD films.  Audio description runs in the background of the main sound track and is equally pleasant whether you can see or not.  For those who need it, Teletext can be read on an electronic Braille pad; especially useful for blind deaf people.

Theatre is a social experience as well as a show. Looking forward to going out with friends is often part of the enjoyment. As with television, the spoken and sung words provide a lot of information and many theatres and cinemas offer audio description for visually impaired people.    There are similar helps at stately homes, museums, art galleries and zoos.

12. All blind people are super-saints

Really!  Sorry, visually impaired people do not have a special gift of patience and tolerance. Nor are they exceptionally religious. Like anyone else, there are times when they feel depressed, frightened, get angry or frustrated with their circumstances. Some struggle with deep spiritual questions, relating to their blindness or their self-worth.

Quite a few trust in God and derive much comfort from their faith. Even so, they would not claim to be super-saints, but just ordinary people trying to get the best out of life.

This entry was posted in About us including WRNS, Living with Blindness. Bookmark the permalink.