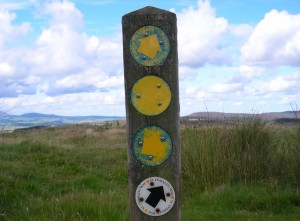 St Oswald’s Way is a long distance walking route, or Pilgrim Path, if you prefer, 97 miles through Northumberland, which used to be part of the ancient Kingdom of Northumbria. We were out walking recently and found ourselves on the part of this path on Simonside, above the town of Rothbury, one of our favourite local places for walking. St Oswald’s Way runs from the Holy Island of Lindisfarne, past the site of Oswald’s palace at Bamburgh on the coast, to the scene of his famous battle at Heavenfield, 3 miles outside Hexham.

Oswald was born in about 605 and killed in 642, much of what is known about this Celtic King and Christian was written by Bede in his Ecclesiastical History of the English people in about 730, around 90 years after Oswald’s death in battle near the Welsh borders. Bede wrote that Oswald was a “man beloved of God” and the ideal Christian king, fighting for his faith in life and death.

He fought many battles; the one at Heavenfield was to confront the Northern Welsh King Cadwallon. Before the battle he set up a cross on the field and called on God to protect and help them, many of his men knelt before that cross too, intrigued by Oswald’s faith. They won the battle; united Northumbria and so put an end to many years of battle and division for a while.

We have been to Heavenfield, a modern cross and a church named St Oswald’s is on that peaceful site today.

Oswald had himself been converted to Christianity by the monks on the Scottish Island of Iona. After he established his kingdom he sent for these monks to come and teach his people, but everything went wrong as these missionaries did not act in a caring, gentle way towards the Northumbrians but came down hard on them, calling them “Stubborn, unreachable people” and returning to Iona, their mission failed.  But one of the monks, when he heard from the returning missionaries, had compassion of these people and felt called to travel himself to Northumbria, where his compassion and care for these folk won their hearts, first to him, Aidan, and then to Christ. This was around 635. King Oswald acted as an interpreter to Aidan as he only spoke Gaelic and later installed Aidan, as the first bishop of Holy Island.

The Pilgrim Path photo shown as the title of this blog would probably have followed the same path that Oswald, Aiden and many travellers would have followed even then, to travel to and from Holy island at low tide. Many still walk this path on pilgrimage even though there is now a modern causeway road you can use twice a day.

Aiden was often at the palace with Oswald but would not eat rich food while so many peasants were hungry and would take food from Kind Oswald’s table to give to the poor. 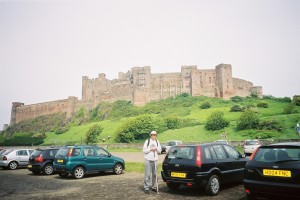 Rob in front of Bamburgh Castle built in stone by the Normans on the site of the ancient wooden one and added to.

Oswald united much of the old kingdoms of England north of the Humber River (hence the name)  and southern Scotland under his rule.

His Royal Standard of purplish-red and gold forms the basis of the modern day flag of Northumberland, which we, like many others, proudly carry on our car on our travels! 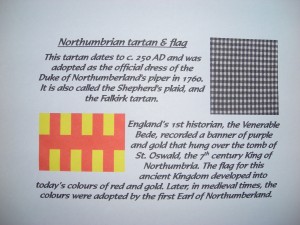 This entry was posted in Celtic 'saints'. Bookmark the permalink.