Rob on the Pacific Beach

Rob loves his music and owns many different Celtic pipes/recorders and whistles. He composes his own tunes as well as playing well-known songs such as Amazing Grace, and his favourite is – Be thou my vision. He usually composes and plays in places such as the nearby Holy Island of Lindisfarne but on our great adventure to Oregon this summer he found himself on the Pacific coast!  We recorded him as he composed and played a new melody, standing next to ancient petrified tree stumps on the edge of the roaring waves of the Pacific, a very spiritual and memorable moment.

We were so close to the incoming tide that we eventually got caught out and ended up with wet feet.

Listen to the music of Rob and the waves! Download sound file here: Playing whistle on Pacific beach.wma 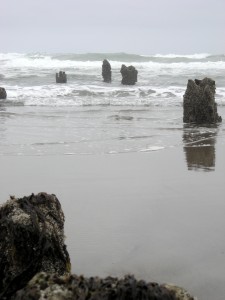 Petrified trees from a prehistoric forest on Neskowin Pacific beach 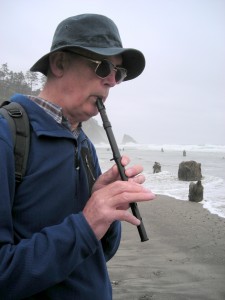 This entry was posted in Creativity-music. Bookmark the permalink.

4 Responses to Rob on the Pacific Beach