If I mention the Lindisfarne Gospels in the north east of England, most people know what I am talking about.     It is the beautifully illustrated book containing the Gospels of Matthew, Mark, Luke and John which was made by the monks of the Lindisfarne monastery in the 8th century.

Far less of us will know about another equally important book which was produced nearby at the same time, the Codex Amiatinus. The Codex Amiatinus is the oldest complete surviving copy of the Vulgate Bible.    Today, it is held in the Laurentian Library, in Florence, Italy but it is the work of the 8th century monks at the joint monasteries of Jarrow and Monkwearmoth in what was then the kingdom of Northumbria.

The two monasteries in the north east of England were founded by a monk called Benedict Biscop.  When he was a young man, he had travelled to Rome to study the Christian faith, with his friend who was later to be known as St. Wilfred.     In AD 674 King Ecgfrith of Northumbria gave Biscop seventy hides of land on the north side of the river Wear at Monkwearmouth so he could make a start in building a monastery there.     He then went on to build a second one, on the south side of the river Tyne at Jarrow.     He was of noble birth and had wealthy backers.     Unlike most Anglo Saxon monasteries of that time, which were built of wood,   his were of carefully worked stone in the Roman style. 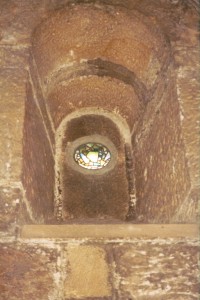 He employed continental stonemasons and coloured glass workers to assist in the work.  Both of the joint monasteries were well endowed with important Christian manuscripts which he had collected in his visits to Italy. 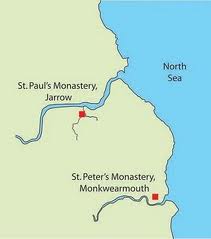 In AD 679 Biscop took another trip to Italy, this time with Abbot Ceolfrith, of Jarrow.    They obtained a copy of the Codex Grandior a complete version of the Latin Vulgate Bible which they brought back to Northumbria.

In AD 692, Abbot Ceolfrith began the huge task of producing three copies of the Codex Grandior.     This was about the time where the twin monasteries were given enough land to rear the 2,000 cattle needed to produce enough vellum.  Each of the copies contained 1029 double leaves made from calfskin and weighed over 75 lb.       Scholars believe that the well equipped monastic community used seven different highly trained scribes to complete the work.  The pages were beautifully written out in Latin using clear, large Uncial script. 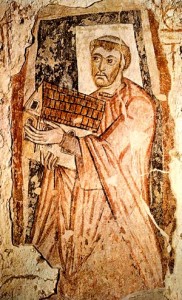 When the three copies of the Codex Grandior were complete, each of them contained all of the books of Jerome’s Vulgate with the exception of Baruch.  Abbot Ceolfrith gave one to Monkwearmouth and a second to Jarrow.    The remaining one he kept himself so he could take it to Rome, as a present to Pope Gregory II.

In June AD 716, Abbot Ceolfrith, at the age of 74   retired from his post and set out for Rome.   Sadly, he never arrived at his destination, for when he was crossing France he died on the 25th September at Langres monastery in Burgundy.    The faithful Northumbrian monks who were accompanying him took his Bible to Rome and presented it to the Pope on his behalf.

It is not understood why, but the Northumbrian bible was in the possession of the monastery at Monte Amiata in Tuscany from the 9th century until its closure in 1792:  Hence it name, Codex Amiatinus.  After that it was taken to its present location in Florence

A further mystery was that,   centuries ago, the dedication page had been altered and it was only in recent times identified as Ceolfrith’s gift to   Pope Gregory II.  For centuries, it had been believed to be Italian.  The forged amendments are clearly apparent; especially the fifth line which reads “Peter of the Lombards” after “Ceolfrith of the English” had been erased.  The true dedication was verified using ultra-violet light.

Today the original manuscript has been unbound by experts in Florence in order to produce a limited edition number of smaller replica copies, one of which is now on display in the north east of England at the Sunderland (City Library and Arts Centre).   This is to celebrate the adoption of Benedict Biscop as Patron Saint of the City of Sunderland.

This entry was posted in Books, Celtic 'saints'. Bookmark the permalink.