To many people, asking if they have filled their shoebox will get you a blank look but from many others it will receive an enthusiastic response.

What am I talking about? 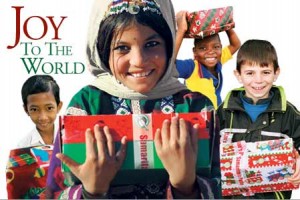 “Let my heart be broken with the things that break the heart of God.” Bob Pierce wrote these now-famous words in his Bible after visiting suffering children on the Korean island of Kojedo. This impassioned prayer is what guided him as ‘Samaritan’s Purse’ (named from the biblical story of the Good Samaritan) was born.

Samaritan’s Purse works in more than 100 countries around the world. International headquarters are in Boone, North Carolina, USA. Affiliate offices are in Australia, Canada, Germany, Ireland, Hong Kong, Netherlands, and the United Kingdom. Field offices are located in some 20 countries across five continents. Franklin Graham, son of the late Billy Graham serves as President and CEO of Samaritan’s Purse.

This world-wide mission to practically help those in great need led to many different initiatives, and Samaritan’s Purse was launched in the UK by the legendary Dr. Billy Graham in 1990 following his visit to Scotland. After just twelve months, Samaritan’s Purse UK had a support base of over four thousand people from a cross-section of individual Christians and churches in the UK.

In 1995, Operation Christmas Child, a Wrexham-based children’s charity, announced its merger with Samaritan’s Purse. Since 1995, the organisation has gone from strength to strength – starting new development initiatives in Africa and Central Asia as well as being part of the global Samaritan’s Purse response to humanitarian disasters such as the Darfur Crisis, the South Asian Tsunami, the Pakistan Earthquake, the Myanmar Cyclone and the China Earthquake. Currently they are working hard to help those is desperate need in Haiti following the earthquake and the subsequent cholera epidemic

But they are most well-known for the simple but effective way that ordinary people and families can get involved – it’s a fun and interactive way to give to a child who might not get anything else this Christmas, or even know what Christmas is.

Simple take an average sized shoe box, cover it in Christmas paper and fill it with small gifts, appropriate to either a boy or girl of a certain age group. You will be given a choice on these and gifts are suggested, from toys to toothbrushes, felt-tips to furry hats, there are also items you should not include, such as toy guns – many of these children will be in areas where war and violence are an everyday reality and they don’t need reminders! Then you add a small donation for the work of organising and delivering the boxes and take it to a local pick-up point, usually a church, shop etc. When you see the film of the boxes been given out to kids in India, the soviet states, Africa etc it makes you realise how much our own children have. Rob and I visited one of their warehouses in Evesham – amazing what an enormous operation this is.

But now there is an alternative way of filling your shoebox, you can still find a local point to get your leaflet and drop off your filled box but you can also choose to do it ‘virtually’ on their website! You do exactly the same as you would normally – choose paper to cover your box, select which sex and age group you are preparing your box for, then click on the offered toys etc and pop them in the box! You can add a short message and even a photo of yourself if you want then pay online through the secure server. This has obvious advantages for everyone as the charity can buy the gifts in bulk and doesn’t have the added cost of transporting bulky boxes to their depots.

Every year this operation is made possible through the amazing support of thousands of children and adults in the UK and Ireland. Last year alone they had the joy of sending nearly 1.2 million shoeboxes bursting with joy from the UK alone and over 200,000 from Ireland to children in parts of Africa, Central Asia and Eastern Europe.

Even if you are too late for this year’s appeal, just contact the website and they will be pleased to tell you when you can donate for next year.

This entry was posted in Living spirituality. Bookmark the permalink.

One Response to Operation ‘Christmas Child’