Our Delta Airbus awaits us at Schiphol Airport, Amsterdam

On 14th July 2010 we flew from our home in Northumberland (North East England) to Portland, Oregon for my younger son Pieter’s big wedding (celebration) to Keven.

They had married in a quick legal ceremony a year before.

This is the 2nd time a son of mine has married a Portland girl and settled there 5000 miles away in the amazing city of Portland. We stayed for a month, seemed too short! More to follow but here is the journey we took to get there:

I started writing this at 33,000 feet above the enormous  snow, ice, glacier and rock covered wilderness of Greenland, on a Delta Airlines flight of around 5000 miles, from Amsterdam, The Netherlands. We left a rainy hometown of Alnwick, Northumberland, UK at 3.15 this morning, to be driven to Newcastle-upon-Tyne airport by David and Rowena, friends from church, we are very grateful for the lift. We took the 6.05 flight to Amsterdam, and then had a long walk to our next gate to board this flight. The flight route took us in a wide northern arc, through the Arctic Circle to eventually cross Baffin Island, then Canada to Portland, Oregon, on the Pacific North West coast of the USA. Usually it takes 11 hours, but we have a tail-wind and should make it in 10. When Rob and I married, in 2002 he had never left the UK, since then he has been with me numerous times to visit my late husband’s family in the Netherlands and, recently, to visit one of my sisters who had moved to Belgium with her husband. Now here we are, off on a great adventure, following Brendan!

Very, very cold outside. Glad we were inside!

He was a Celtic saint who travelled far and wide in the 6th century, possibly even following the northern arc route to North America from Ireland. This voyage was reconstructed by Tim Severin, in 1976, who had meticulously worked to make sure that the leather skinned boat he had made was, for all intents and purposes, identical to the ‘mythological’ boat in which St. Brendan and the Irish monks crossed the North Atlantic centuries before the Vikings. He proved it could be done. His book http://www.amazon.co.uk/Brendan-Voyage-Timothy-Severin/dp/0349107076 is fascinating.

I have posted more on St Brendan the Navigator (as he is called) on a page in my Celtic Saints catagory. http://www.pilgrimpath.net/?p=408

Ice crystal patterns on the plane window -How cold was it outside?

With clear skies for most of the journey I was able to take many photos from our comfortable warm cabin, the screen in front of me showed where we were on the map, the outside temperature and the distance travelled/remaining to destination. The outside temperature got as low as -61 centigrade, -77.8 fahrenheit! It was amazing to see the Shetland Isles, Iceland, huge Greenland, Baffin Island, Canada and Washington and Oregon from the air. Really makes you appreciate how far these distances are, remembering the enormity of the risks taken by our forbears! In case you are wondering why the airlines chose the Great Circle Routes, here is a link to a great site which shows the earth from an unusual angle to prove how the route we flew was the shortest! I found clicking on the “Blue marble” choice made it clearer to me, by the way, the big white island in the middle is Greenland, it took us about 2 hours to fly over it!  http://www.gcmap.com/mapui?PATH=AMS-PDX&RANGE=&PATH-COLOR=&PATH-UNITS=mi&PATH-MINIMUM=&SPEED-GROUND=&SPEED-UNITS=kts&RANGE-STYLE=best&RANGE-COLOR=&MP=

Once we started over the Canadian mainland we began to appreciate how large this country is, with so few towns visible, it was great to follow our journey on the screen as I could tell Rob just where we were in relation to towns, mountain ranges, lakes etc. Was it coincidence, I wonder, that the Delta crew handed us all a snack of Pizza and ice-cream just as we flew over the ‘border’ between Canada and the USA?

Mt St Helens, over the Columbia River in Washington State, as we came in to land at Portland 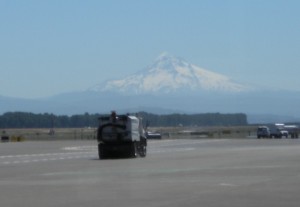 Mt Hood as seen from the Portland Airport bus

Spotting the Pacific Ocean for the first time was also a special moment – it is a long way from the North Sea! As we came in to land at PDX (Portland Oregon) I saw both the pointed top of Mt Hood and the flattened peak of Mt St Helens, which lost its top when a massive eruption occurred in 1980 which reduced St. Helens’ height by about 1,313 feet (400 m).

We felt so amazed that we were actually in the Pacific North West of the USA, (especially Rob) had a friendly welcome from Immigration and were immersed in hugs and kisses by my two sons and their wives as we emerged, bemused, tired but elated and filled with wonder at the magnificence of this earth we call home.

Here are links to the other stories of these two weddings and our growing love for Oregon.

This picture is very blurred, I was so thrilled and emotional at seeing the family! 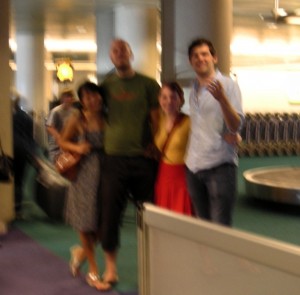 My hands were shaking with joy so Kim, Kjell, Keven and Pieter are blurred!

This entry was posted in Journeys, Our Pilgrim Path. Bookmark the permalink.